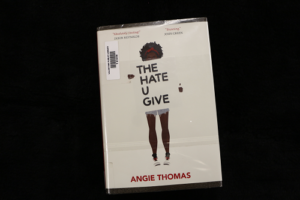 Featured this month will be the book “The Hate You Give” by Angie Thomas. Inspired by the Black Lives Matter movement, Angie Thomas’s searing debut about an ordinary girl in extraordinary circumstances addresses issues of racism and police violence with intelligence, heart, and unflinching honesty. Soon it will be released as a major motion picture from Fox 2000/Temple Hill Productions.

The Hate U Give debuted at number one on The New York Times young adult best seller list, where it remained for 50 weeks. The book was recognized in 2018 by the American Library Association with the William C. Morris Award for best debut book book for teens, the Odyssey Award for best children’s audiobook, the Coretta Scott King Award for the best novel by an African American author for children, and the Michael L. Printz Award for best novel for teens. The novel also won the overall Waterstones Children’s Book Prize and American Bookseller’s Association Indie Award for Best Young Adult Novel and was nominated for 2018 Carnegie Medal (literary award), and the 2018 Deutscher Jugendliteraturpreis in the “Jugendbuch” (Youth book) section. The Hate U Give was named to the National Book Awards longlist for young adult literature.

Author: Janette Duffield
Filed Under: news
Did you know you can help the library when you shop?
Available Now: Goodreads Choice Award Winners for 2018

HERE IS WHERE PEOPLE,
ONE FREQUENTLY FINDS,
LOWER THEIR VOICES
AND RAISE THEIR MINDS.