Jeff Barnes will be here to provide his presentation “Nebraska’s Landmark Buildings”. 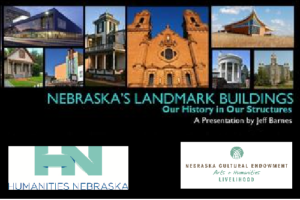 This event will be held at the Valentine Public Library on Tuesday, September 18 at 7:00 p.m.

From the first trader cabins through the skyscrapers of today, the buildings of Nebraska tell the story of the state. They carry the tales of pioneers, of its emigrant and ethnic groups, of its famous sons and daughters, of its suffering through war, its prosperity in peace, and of its innovation and excellence.

Jeff Barnes, author of the new book 150 at 150: Nebraska’s Landmark Buildings at the State’s Sesquicentennial, features many of the buildings that have survived the decades, the architects who designed them, and the communities and people who used them. His talk also highlights Thomas Rogers Kimball, the state’s greatest architect and the newest inductee of the Nebraska Hall of Fame. Additionally, Barnes will also feature local landmarks for each community presentation.

Humanities Nebraska (HN) provides major funding for this program. HN receives support from the National Endowment for the Humanities, the Nebraska State Legislature, the Nebraska Cultural Endowment, and private donations.

It's a wonderful day for reading or watching a new

Stop by the library for book suggestions or for he

Take a break from #BlackFriday shopping with the b

We wish you a safe and happy holiday. Closed for T

#ThrowbackThursday from Valentine. Featured this

It's a wonderful day for reading or watching a new movie. Stop by the library today. ... See MoreSee Less

Don't forget......the Bookmobile heads out tomorrow on Wednesday. Check out the link for the full schedule and times:valentinelibrary.org/bookmobile/Reserve online, email the library at info@valentinelibrary.org or give us a call at 402-376-3160 if you need any help or have certain books you would like sent out for you.#libraryservices #smalltownservice #bookmobile #ReadonVPL ... See MoreSee Less

Stop by the library and use one of the drop boxes for books for Share the Gift of Reading. Don't forget the deadline is in a couple weeks on December 14th. ... See MoreSee Less

When this happens, it's usually because the owner only shared it with a small group of people, changed who can see it or it's been deleted.
View on Facebook
· Share

Visit us at the library and utilize this wonderful new service to see us Monday-Friday from 9:00 a.m. to 6:00 p.m. ... See MoreSee Less

When this happens, it's usually because the owner only shared it with a small group of people, changed who can see it or it's been deleted.
View on Facebook
· Share

HERE IS WHERE PEOPLE,
ONE FREQUENTLY FINDS,
LOWER THEIR VOICES
AND RAISE THEIR MINDS.